The CRANFOS ammoniac water process uses the strong ammonia chemical affinity for extensively absorbing the sulfur dioxide from the flue gas, reducing it to any required emission value, imposed by the local pollution control authority.

Sulfur oxides are absorbed in the gas scrubbing section according to the following chemical reactions:


The byproduct is a high quality fertilizer – ammonium sulfate grade.

The boiler flue gas is dedusted before entering the quenching and scrubbing sections. Particle removal needs to be very good in order to minimize impurities on the ammonia sulfate byproduct.

The dedusted flue gas enters the quenching zone where it is cooled to the saturation temperature through a water sprinkling process. Then, the dedusted, cooled and saturated flue gas passes through the scrubbing sections flowing upstream through a double mesh filling bed column, backwashed with scrubbing solution. The intense gas-liquid contact inside the filling allows the full absorption of the contaminating SOx.

The ammoniac water-based FGD system produces ammonium salt aerosols (submicron particles), when the SOx content on the flue gas is high (>1000 ppm). For absorbing such aerosols, a wet electrostatic precipitator (WESP) is integrated at the top of the gas scrubber. The WESP collects all aerosols contained on the clean gas, thus avoiding a visible plume at the chimney outlet.

The clean, dust-, contaminating SOx-, and aerosol-free gas is now discharged to the atmosphere via chimney (Picture below). 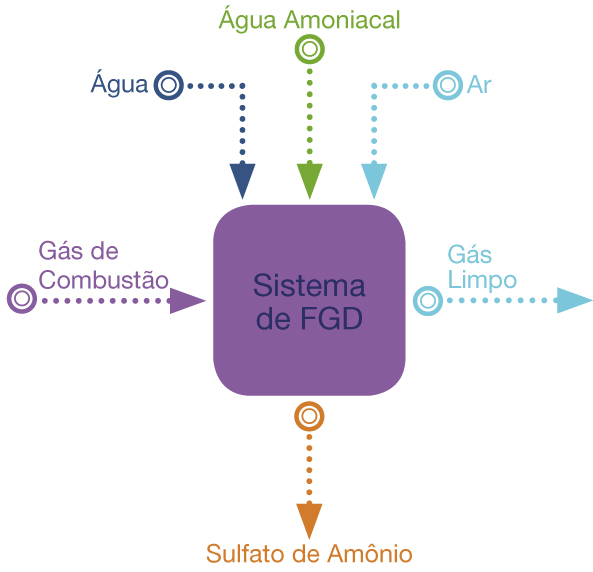 
High flexibility to adapt the production of fertilizer to specific local requirements and market demand:

The CRANFOS latest generation FGD technology, which has been developed for preventing acid rain and environmental air contamination, is, among all other processes, the only system to produce a valuable byproduct which is the promptly marketable ammonium sulfate fertilizer.

There is a demand for ammonium sulfate by the agricultural industry.

Under certain conditions, that is, by changing the extremely expensive low sulfur content fuels to high sulfur content fuels on already existing boilers, the ammoniac water process becomes much more attractive economically by adding the income generated by the ammonium sulfate sales to the fuel cost savings. The higher SO2 content on the flue gas, the higher fertilizer production and generated gain flow.

The ammonium sulfate sales income compensates, within a limited timeframe, the investment costs.

Electric power plants equipped with conventional lime/limestone scrubbers can be converted into scrubbing with ammoniac water by using the same equipment, thus reducing the investment costs.